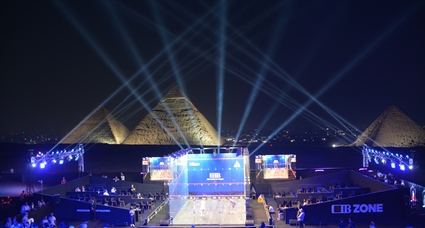 Under the auspices of the Ministries of Youth and Sports, and Tourism and Antiquities:
Hyundai sponsors the 2021 CIB Egypt International Squash Open

Cairo, Egypt – September 12, 2021: Represented by Hyundai, GB Ghabbour Auto, the leading manufacturer and producer of cars, took it upon itself to sponsor the third edition of the 2021 CIB Egypt International Open Squash Championship for men and women. This mega tournament was bound to take place between New Giza and the Giza pyramid complex, from the 10th to the 17th of September.

Generally, the CIB Egypt International Squash Open is deemed to be one of the eight largest Platinum Championships worldwide. Thus, in order to create such a huge event that would be commensurate with the magnitude of this championship, I-Events, a pioneering events agency in Egypt and the MENA region, was asked to pitch in the organization process.

In fact, GB Ghabbour Auto’s sponsorship to this championship came under the auspices of the Ministries of Youth and Sports, and Tourism and Antiquities, and simultaneously complied with Hyundai’s overall strategy pertinent to supporting the Egyptian youth via advancing the sports sector.

In addition, this prestigious step was taken due to GB Ghabbour Auto’s outright belief that investing in the upcoming generations’ health and wellbeing would certainly prompt them to attain local and global accomplishments – currently and in the long term.

Additionally, the company is also aware of the vital and significant role that squash plays as a robust and distinct sport, which Egypt has been mastering for several years now. In other words, there are a myriad of young squash players who have recently emerged, as well as have led by example with their exceptional and world-class performance.

Stemming from this fact, this year Hyundai was keen to support the Egyptian players, competing in the championship, with the aim of honoring Egypt’s name internationally. The list of those players encompassed renowned names, including Mohamed El Shorbagy, Ali Farrag, Nour El Sherbiny, Nouran Gohar, Tarek Moamen, and Marwan El Shorbagy.

On a broader note, the tournament embraced 96 of the world’s best squash players, from 26 countries around the world. It is also noteworthy that during the tournament, Hyundai was able to grant its Tusan, Elantra, and Creta cars to the top ten Egyptian players, so that they could ride them freely throughout the entire period of the tournament.

Hyundai also dedicated a specific place amid the area, in which the championship occured, to display the 2022 Tucson, in the hope of getting the crowds introduced to the company’s recent releases. All of that was done by both GB Ghabbour Auto and Hyundai for the sake of winning their customers’ trust, admiration, respect, and loyalty over.

In this context, Kawthar Aboul Fotouh, Hyundai Brand Manager at GB Ghabbour Auto, stated: “Hyundai, through its authorized dealer, GB Ghabbour Auto, is generally keen to support various Egyptian sectors, as well as works to uphold Egypt’s 2030 Vision. Therefore, this year we focused on fostering one of the most important sports that bring about tremendous success; locally and internationally. Needless to say, the Egyptian squash scene comprises a multiplicity of professional and ahead-of-the-curve players that all the fans of this game take pride in.”

She added: “As aforementioned, this year Hyundai is sponsoring the 2021 CIB Egypt International Squash Open. Indeed, the great success achieved by the tournament during the previous years, encouraged Hyundai to be an important and influential partner in this success. During this event, Hyundai will showcase a group of its cars that are characterized by their high performance and ultimate luxury.”

Last but not least, the 2021 CIB Egypt International Open comes as an affirmation of the achievements made by Egypt in the international squash scene, given that the Egyptian players were able to acquire the highest international squash rankings. In addition, it accentuates the role that these tournaments play in revitalizing tourism, hence promoting Egypt as a country that owns whatever it takes to enable it to organize and hold significant international events and championships.

Sign-up for industry alerts, news and offers from Hyundai Egypt
MENU
Have no product in the cart!
0